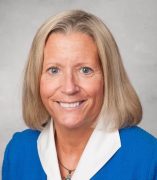 Mary Jo LaDu, Professor in the Department of Anatomy and Cell Biology, graduated from Grinnell College with a BA in Art History (1980) and a PhD in Physiology and Biophysics from the University of Illinois at Chicago College of Medicine (UIC-COM, 1991). She continued her training as a post doc and junior faculty at the University of Chicago studying the role of apolipoprotein E in cardiovascular disease until the greatest genetic risk factor for Alzheimer’s disease (AD) was identified -the APOE4 gene. She has been studying APOE4 and AD since 1993.

She moved her lab to UIC in 2005 from a tenured position at Northwestern University and now runs a large NIH- and pharma-funded lab focusing on treatments and biomarkers for AD. After developing a novel AD transgenic mouse that mimics the pathology of the human disease, the lab focuses on understanding the increased AD risk in APOE4 females.

Dr. LaDu’s research has generated 100+ publications, 35 research grants as PI (continuous NIH funding since 1995), 80+ grants/awards for undergraduates, graduate students and post-docs, the Alzheimer’s Association Zenith Award (2008), UIC-COM Innovator of the Year (2016) and Mentor of the Year from the Honor’s College (2019). She also received the Chancellors Innovation Fund and the new DPI Phase-2 Innovation Award.